In honor of their belated 40th anniversary, Thatâs Entertainment of Worcester, Massachusetts invites everyone to a very special signing event with renowned UK comic book artists Simon Bisley and Glenn Fabry. The event will be held on Sunday, April 10th, 2022, from 1:00 p.m. to 5:00 p.m. Admission will be free. Attendees over the age of 12 years of age may request one free signature from each artist. Signatures beyond the 1st one will be $10 each.

If time permits, Bisley and Fabry will be offering to draw quick remarque sketches ($100 each), and/or head sketches ($300 each) in the last hour of the event. However, guests may also request sketches prior to the event, which they can then pick up at the event or at a later date. Prepayment is required for an advance sketch. Please send your requests to sorana@thatse.com.

There will be a CBCS witness on staff verifying the authenticity of signatures at the cost of $5.00 per signature. Signatures on comics that will be graded will be $25.00 each. Grading fees will be separate.

In 2020, Thatâs Entertainment postponed their anniversary celebration due to the COVID-19 pandemic. They are excited to finally resume plans for this long awaited milestone event. This yearâs celebration will officially mark 42 years of business.

Manager Sorana says, âThe past two years have been so tough on everyone, but weâve come through in good shape, thanks to unbelievable support from our customers,Â  soÂ  It feels like we now have even more to celebrate. And according to Douglas Adams, âThe answer to the ultimate question of life, the universe and everything is 42,â so maybe 42 is the bigger deal anyway. â

Then on Saturday, April 16th, join Thatâs Entertainment for their belated 40th anniversary PARTY. The store will be hostingÂ  a meet and greet with store owner Paul Howley from 12:00 p.m. to 7:00 p.m. Enjoy snacks, cake and coffee with Paul from 12:00 p.m. to 2:00 p.m. in our Red Room. In the old days, Paul was at the counter almost every day, but in recent years itâs been hard to catch up with him, so donât miss out on this opportunity to share your memories, and discuss the past, present, and future of pop-culture.

Simon Bisley is a British comic book artist best known for his 1990s work on ABC Warriors, Lobo and SlÃ¡ine. His style, reliant on paints and airbrushing as well as inks, was strongly influenced by Frank Frazetta and Bill Sienkiewicz, and took inspiration from rock album covers and graffiti as well as traditional comics art.

While still a student, Bisley did a painting of a robot holding a baby that he sent to the offices of 2000 AD. The image was seen by Pat Mills and inspired him to relaunch the ABC Warriors strip in 1987, with Bisley as artist. Following this, Bisley took over drawing of SlÃ¡ine. Bisley also painted the intercompany crossover Judge Dredd and Batman, Judgment on Gotham.

Both Simon Bisley and Glenn Fabry will be appearing at Wicked Con in Boston, MA on Saturday, April 9th, the day before their signing at Thatâs Entertainment in Worcester, MA.

That’s Entertainment, located at the corner of Lois Lane and Park Avenue in Worcester, MA, is a pop culture emporium which specializes in everyone’s “geek.” Checkout their wide variety of comics, vinyl records, vintage and modern video games and systems, anime, collectible card games, role-playing games, board games, sports cards, memorabilia, toys, posters, and so much more. For more information, contact Sorana at sorana@thatse.com or call 508-755-4207. 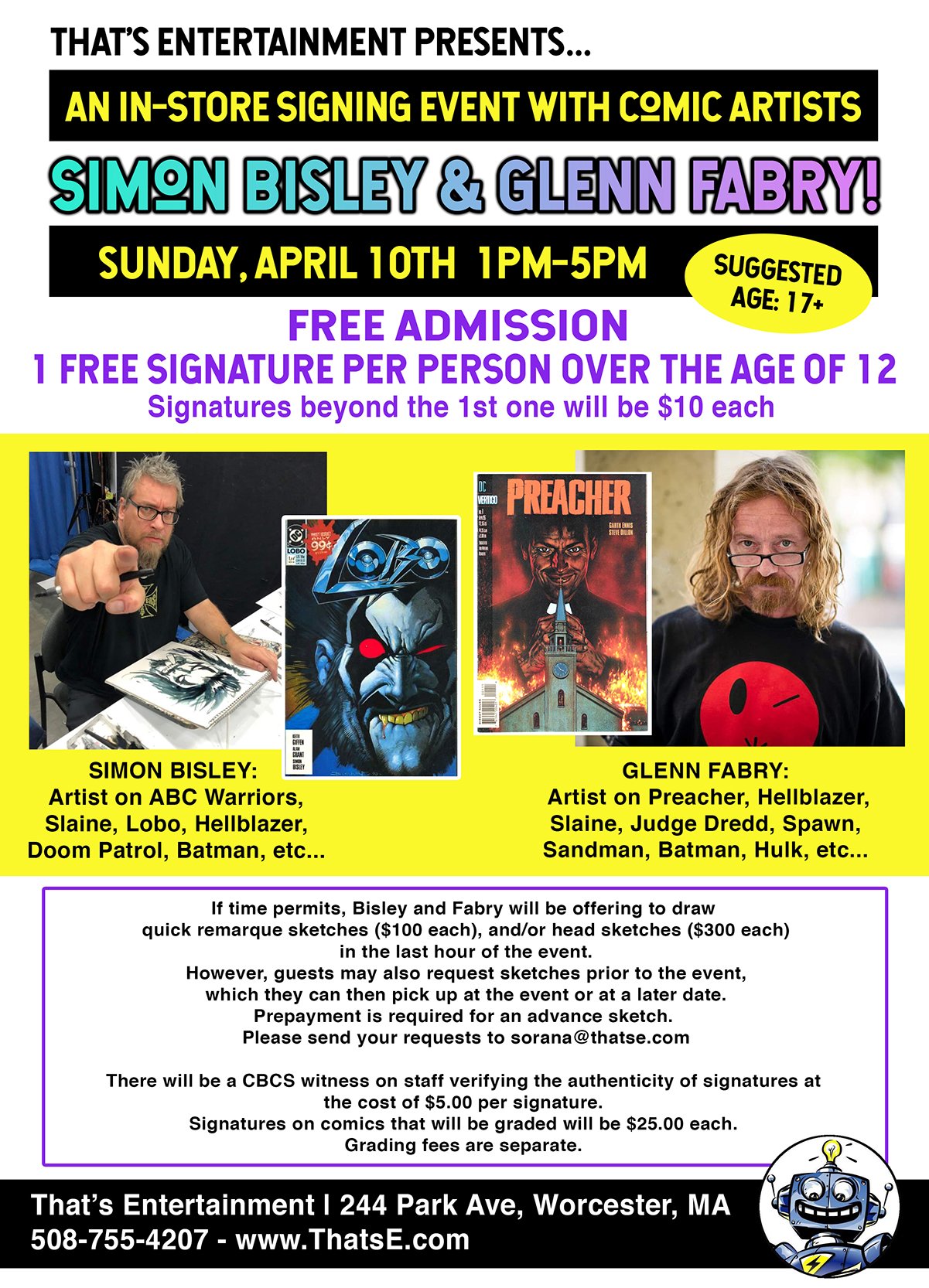