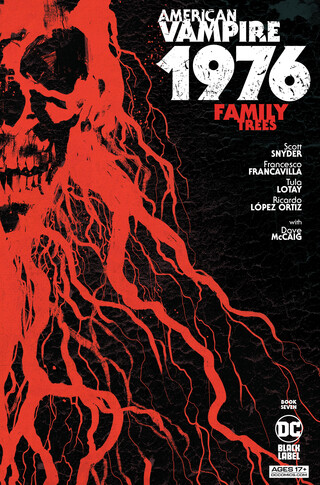 AMERICAN VAMPIRE 1976 #7 (OF 10)
Art by:Ricardo LÃ³pez Ortiz,Â Tula Lotay, Francesco Francavilla
Written by:Scott Snyder
Before Skinner and Pearl reunited and the Beast returned-before 1976-the fight to protect humanity persisted. This special anthology issue presents new stories from the unseen era between American Vampire: Second Cycle and American Vampire 1976, bridging the VMSâ turbulent past with a nationâs uncertain future. Jim Book and Pearl will test their new partnership on a mission to uncover new DNA technology in the fight against the Beast, Travis, and Gus enjoy a rare carefree moment in exile, and a deathbed vision reveals the truth about George Washingtonâs pact with the Council of Firsts and Americaâs role as a haven for persecuted monsters. 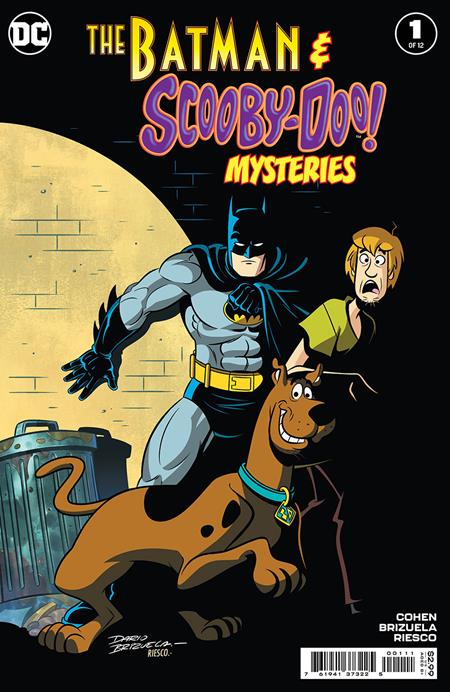 BATMAN & SCOOBY-DOO MYSTERIES #1 (OF 12)
WRITER IVAN COHEN
ARTIST Dario Brizuela
COVER ARTIST Dario Brizuela
Itâs an all-new, all-ages series that teams the Dark Knight with Scooby-Doo and the sleuths of Mystery Inc.! When Batman discovers his original purple gloves have gone missing, Velma, Shaggy, and Scooby-Doo travel back in time to Batmanâs Year One era to solve the case! Will this âGlove Storyâ have a happy ending? 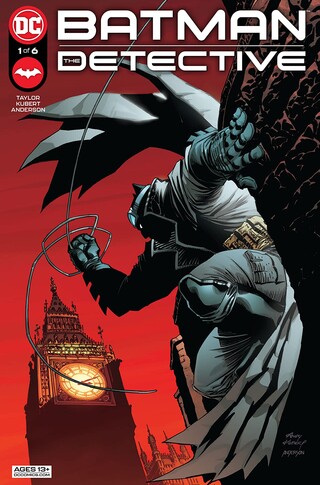 An epic tale begins that will take Batman on a harrowing, action-packed European adventure in a new miniseries by superstar creatorsÂ Tom TaylorÂ andÂ Andy Kubert!Â

A horrific tragedy in the United Kingdom sends a very personal and deadly message to the Dark Knightâone that will draw Batman out of Gotham City to investigate! From the moment he lands in Europe, Batman will face a difficult investigation and unheard-of adversaries and find the assistance of a partner once moreâall in the hunt for the villain known as Equilibrium!Â New villains! New allies! A thrilling overseas adventure begins for the Dark Knight! 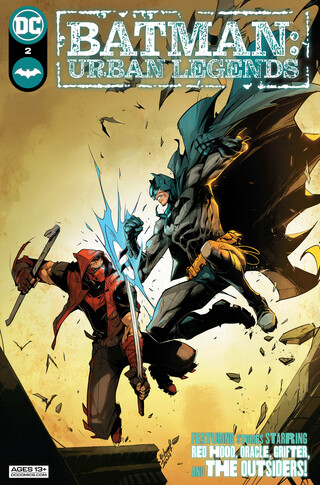 BATMAN URBAN LEGENDS #2
Art by:Ryan Benjamin,Â Marguerite Sauvage,Â Max Dunbar,Â Eddy Barrows
Cover by:Hicham Habchi
Written by:Matthew Rosenberg,Â Brandon Thomas,Â Cecil Castellucci,Â Chip Zdarsky
The new Batman anthology series continues! In part two of Chip Zdarsky and Eddy Barrowsâs epic Batman/Red Hood story, Jason Todd has taken a manâs life, and now his mission is to keep the dead manâs young son safe. But Batman plans to take down Jason before he can make another mistake. Then, in chapter two of Matthew Rosenberg and Ryan Benjaminâs senses-shattering tale, Cole Cash earns his pay as personal bodyguard to billionaire Lucius Fox, but what led him to Gotham in the first place? How does the mysterious HALO Corporation play into it all? And which Bat-Family character does he have an unfortunate meeting with in this chapter? And in part two of Brandon Thomas and Max Dunbarâs epic Outsiders story, see Katanaâs perspective on what brought the Outsiders to Japan, who wants her dead, and what her ultimate punishment will be for no longer having her husbandâs spirit in the Soultaker sword. Plus, Barbara Gordon has identified a citywide system hack from a foe she faced before as Batgirlâ¦but this time around, Babs may have found a way to defeat her for good as Oracle! 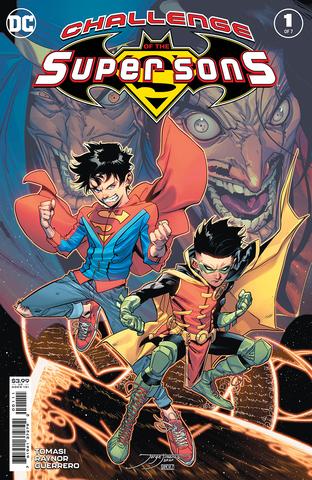 The boys are back! Picking up where the sensational Adventures of the Super Sons left off- the sons of Batman and Superman are back in the spotlight and ready to give evil a good spanking. But are Robin and Superboy in over their heads this time? A mysterious woman from beyond time has appeared to the DCUâs favorite sons- and her arrival heralds certain doom (thatâs a hint- everyone) of things to come! In fact…it seems sheâs sent the boys on a bogus journey that theyâve already…returned from? Huh? What did the boys learn when they were whisked away? Why on earth do they have to save the Flash from instant death? Tune in for the first chapter in the most epic odyssey Robin and Superboy have ever been on!

This listing uses stock images, images may not have final trade dress. Final art may vary and will have trade dress (logos). Virgin covers will be explicitly stated in the title. If the title does not state that the cover is virgin, it will have logos/trade dress. Industry standard is to provide retailers with images prior to release, these images usually do not contain logos but logos will be on the actual product when it is released.

Any CGC offerings will ship in approximately 60 – 90 days after the release date. Signed, special or limited edition items usually have later release dates than the initial release. Title may state the release date of the unsigned/non limited item. 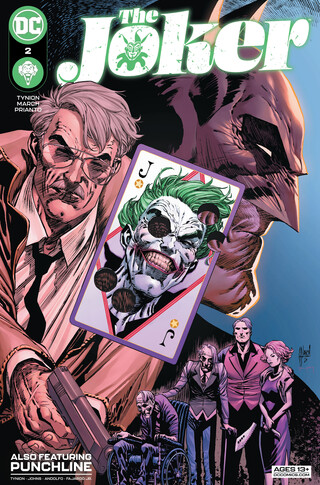 As the dust settles on Arkham Asylum and tragic recent events, the Joker is the most wanted man in the world and powerful forces are lining up around the globe to hunt him…but where exactly is the Clown Price of Crime? Jim Gordon, facing his twilight years haunted by the madman, knows where to start the huntÂ and heâs been given the go-ahead to pursue him…but will he be willing to pay the price? And what shocking revelation will Gordon stun Batman with before he departs?

And in the backup story, within the walls of Blackgate Penitentiary, Punchline has become the target of the Queen of Spades from the Royal Flush Gang. Itâll take everything Punchline has just to survive, while on the outside, Bluebird digs deeper into Punchlineâs horrific past! 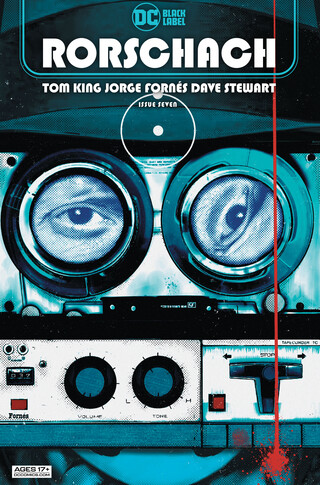 RORSCHACH #7 (OF 12)
Written by:Tom King
Art by:Jorge Fornes
Wil Myerson might have been the creator of Pontius Pirate, the most popular comic in history, before he put on the Rorschach mask and tried to kill a would-be president, but heâs not the only artist who worked on the character. Other artists fell under Wilâs influence, and now all these years later, his more renowned acolyte has fallen sway to Laura, the #1 Myerson superfan. Is it possible she influenced another comic book legend into playing vigilante? The key here is that tape the detective is trying to decipher, the one with the sÃ©ance that has been haunting him since the very first issue! All this and a cameo by Dr. Manhattan to boot! 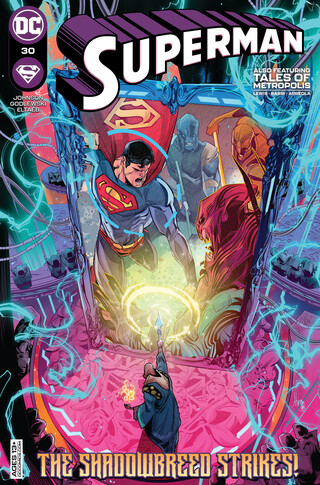 Superman has received a signal from distant space. An old friend is in deep trouble, and only the Man of Steel can help him. By the time Superman and his son get there, though, the alien who sent the signal is nowhere to be found, and his people appear to be enthralled by a shamanistic storyteller who warns of an ancient grudge with the malevolent Shadowbreed. This leaves Clark and Jonathan Kent to ponder just who sent them the distress message, but before they can find the answer, theyâll discover that an ancient grudge still has very current consequences. Kicking off a new story line, this issue pairs Phillip Kennedy Johnson with hisÂ Future State: Superman: House of ElÂ collaborator, artist Scott Godlewski!

Meanwhile, in the âTales of Metropolisâ backup story itâs…the return of Ambush Bug? Say it ainât so! 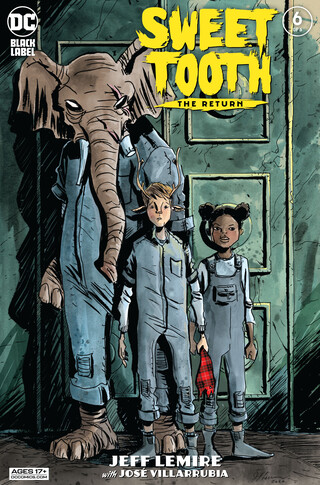 SWEET TOOTH THE RETURN #6 (OF 6)
Art by:Jeff Lemire
Written by:Jeff Lemire
Once upon a time a young boy with antlers lived in a little house under the earth. He had a father and two nannies. They raised him to be good and to obey their every command. They said they loved the boy, and maybe some of them did, but Father? Well, he only loved himself. Father says the boy is a weapon against those who stand in opposition to humanity, while the rebellious Undersider dissidents believe the child to be the second coming of a mythological savior from the past. Haunted by dreamlike memories of a life he never lived and hunted by the man who created him, the boy must choose what and who he will be, and bring this chapter of his life to a close. 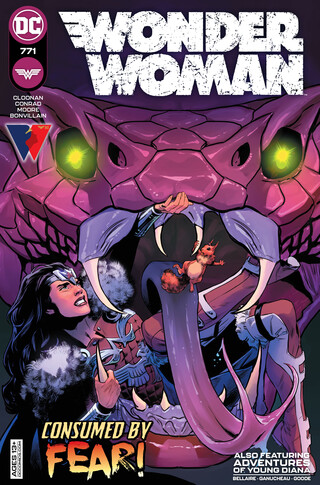 WONDER WOMAN #771
Art by:Paulina Ganucheau,Â Travis G. Moore
Written by:Jordie Bellaire,Â Michael Conrad,Â Becky Cloonan
Wonder Womanâs adventures through the Sphere of the Gods continue as she embarks on a quest with the cunning Ratashok to search for answers. Something is changing the rules of the Norse afterlife, and itâs up to our hero to set things right. Now she must face warriors and beasts of mythic proportions, starting with the Nidhogg! Can our Amazon Princess survive this staggering serpent? Meanwhile, in a seemingly simpler time in our heroâs life, a younger Diana continues her journey to uncover the secret behind the scriptures that hold the hidden history of Themyscira. Is she ready for the truth? Or will it change her perception of âparadiseâ forever?