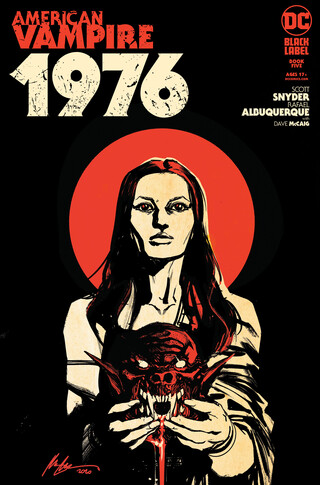 AMERICAN VAMPIRE 1976 #5 (OF 9)
Art by:Rafael Albuquerque
Written by:Scott Snyder
Skinner, Pearl, Book, and the rest of the team are finally united in their mission to stop the Beast from world domination, but the missing key to their success is protected by a council of preeminent ancestral monsters with an axe to grind. These are the progenitors of some of the worldâs most iconic folkloric species, and the victims of a broken American promise. Desperate for the councilâs assistance, Skinnerâs crew becomes a captive audience to their tale of betrayal-but the chilling insight saps all hope of recruiting their help. With only a few days to spare before terror is unleashed, the team must convince the legends that humanity is worth preserving, and that history may still bend toward redemption. 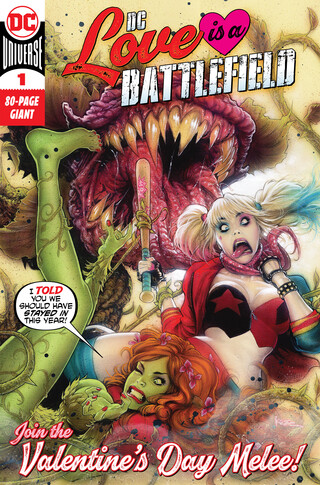 DC LOVE IS A BATTLEFIELD #1 (ONE SHOT)
Art by:Amancay Nahuelpan,Â Rob Guillory,Â Juan Gedeon,Â Karl Mostert
Written by:Crystal Frasier,Â Mark Russell,Â Sina Grace,Â John Ridley
BLAM! KRACK! POW! Look out, itâsâ¦love?! Falling in love is rough, even for DCâs greatest. Watch as Batman and Catwoman, Wonder Woman and Steve Trevor, Mister Miracle and Big Barda, and all the rest of your OTPs fight in vain against the all-powerful forces of romance (and super-villains)! Even Amanda Waller fights the urge to bail on her mystery date. We guarantee that this Valentineâs Day, someoneâs taking a shot to the heartâfrom Cupidâs bow! 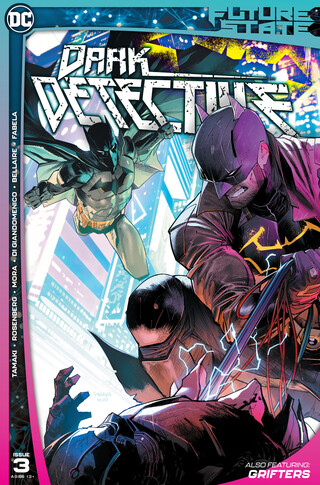 FUTURE STATE DARK DETECTIVE #3 (OF 4)
Art by:Carmine Di Giandomenico,Â Dan Mora
Written by:Matthew Rosenberg,Â Mariko Tamaki
In this issue, Bruce Wayne meets the next Batman! As the dark detective makes his move to put an end to the villainous Magistrate once and for all, the man who once wore the cowl encounters the next Batman-and these two have some questions for each other! Fists will fly as this explosive meeting erupts in the skies over Gotham…but with the clock ticking, can Bruce finish what he started and unlock the secrets of the fascist surveillance that plagues his city? And in âGriftersâ part two, the lucky streak that Cole Cash and Luke Fox have enjoyed just hit a brick wall in the form of the Huntress! The over-the-top adventure in the gutters of Gotham City concludes in the most bone-crushing fashion possible! 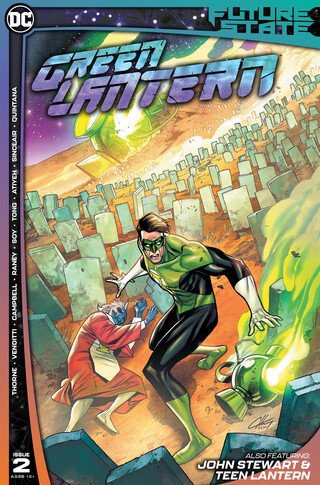 FUTURE STATE GREEN LANTERN #2 (OF 2)
Art by:Tom Raney,Â Dexter Soy,Â Andie Tong
Written by:,Â Robert Venditti,Â Josie Campbell,Â Geoffrey Thorne
Outnumbered but never outwitted or outfought, John Stewart leads the last of the Green Lanterns against insurmountable odds. Facing a bloodthirsty Khund cult dedicated to the âGod in Red,â the onetime Green Lantern shows that even without a ring or the Corps to back him up, heâs still a force to be reckoned with! Plus, from the pages of Young Justice, Teen Lantern teams up with Mogo, and Hal Jordan reconnects with Oliver Queen after the power battery goes down! 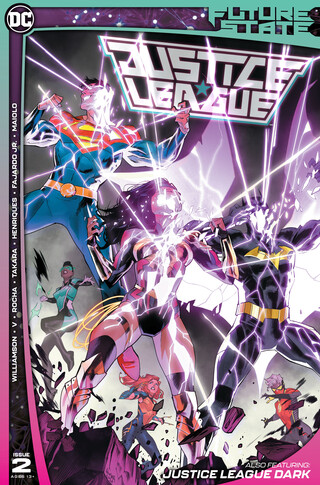 FUTURE STATE JUSTICE LEAGUE #2 (OF 2)
Art by:Marcio Takara,Â Robson Rocha
Written by:Ram V.,Â Joshua Williamson
Exiled to a distant planet, the Justice League suspects an impostor in their midst, but not even the next Batman or Green Lantern can find the clues theyâre looking for. Meanwhile on Earth, the terrifying return of a classic Justice League villain may spell doom for the planet! DoppelgÃ¤ngers abound, paranoia runs rampant, and only the Justice League can save humanity-if they can ever find their way home. Plus, all the worldâs terrible truths are revealed as the Justice League Dark make their last stand. Hunted, beaten, and harvested for their magic, Zatanna, John Constantine, Detective Chimp, Ragman, Madame Xanadu, and Etrigan all unleash a desperate plan that could destroy them-but is it worth the cost to finish Mad Merlin and his mysterious Knights? Only Doctor Fate knows, and the truth may spell hope or doom! 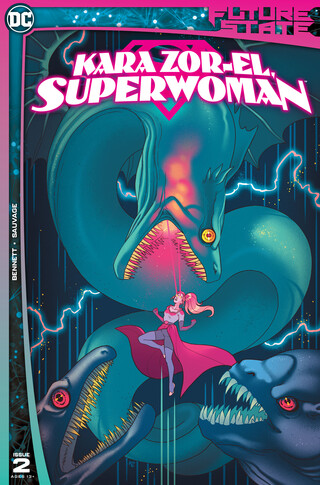 FUTURE STATE KARA ZOR-EL SUPERWOMAN #2 (OF 2)
Art By: Marguerite Sauvage
Written by:Marguerite Bennett
The moon colony built around Superwomanâs Fortress of Solitude is under siege! Shape-shifting aliens have come to this place of peace in search of Lynari, a refugee from their homeworld. Itâs a bad move on the part of these intergalactic bad guys: if Kara Zor-El offers you sanctuary, thereâs no way sheâs going to let anyone get their monstrous hands on you. Letâs just hope this gamble is worth it, because Lynariâs secret-the one that got her in trouble in the first place-could mean bad news for everybody! 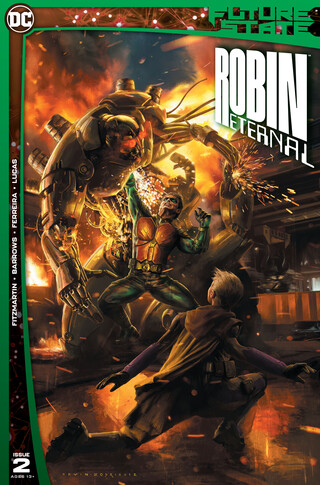 FUTURE STATE ROBIN ETERNAL #2 (OF 2)
Art by:Eddy Barrows
Written by:Meghan Fitzmartin
Tim Drake is dead at the hands of the Magistrate. Uh, so why is he getting back up again? With the dangerous and supercharged âLazarus Resinâ coursing through the veins of the hero once known as Robin, can Tim recover enough of his fragile psyche to finish the mission and blow the sky convoy? And can Spoiler and Darcy escape the clutches of Peacekeeper 03 in time to save their friend in the process? It all comes to a head in this cataclysmic finale! 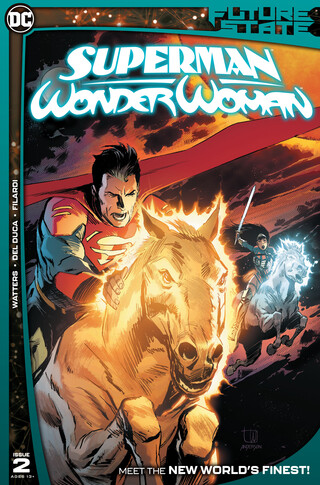 FUTURE STATE SUPERMAN WONDER WOMAN #2 (OF 2)
Art by:Leila del Duca
Written by:Dan Watters
Our heroes have challenged the gods themselves to a test of bravery for the fate of the Earth. But gods are notorious cheaters, and with Supermanâs powers in flux, it falls to Wonder Woman to face down the sun itself! A utopian future awaits-but only if a Kryptonian peacemaker and an Amazon warrior can put aside their differences to become the Worldâs Finest Heroes! 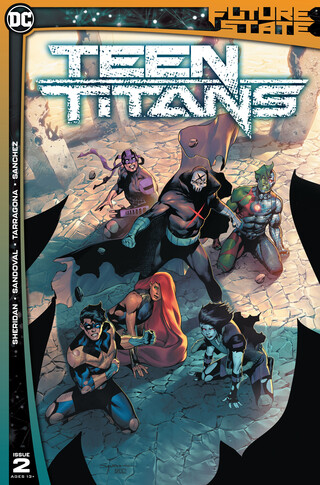 FUTURE STATE TEEN TITANS #2 (OF 2)
Art by:Rafa Sandoval
Written by:Tim Sheridan
Red X returns to the Teen Titans! The mysterious former Teen Titans Academy student joins the surviving Titans in a final fight to stop the threat unleashed by one of the schoolâs students. Nightwing, Raven, Crush, Shazam, Starfire, Cybeast, and Red Arrow face their demons as one of these heroes must make the ultimate sacrifice to save their world! 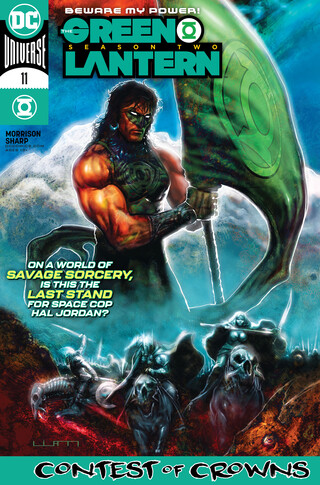 GREEN LANTERN SEASON TWO #11 (OF 12)
Art by:Liam Sharp
Written by:Grant Morrison
Hal Jordanâs future as a Green Lantern is threatened when the Young Guardiansâ plans to restructure the Corps move into high gear. Whatâs a guy to do but take a vacation? But when Jordan arrives on the swords-and-sorcery world of Athmoora for some R&R, he comes face to face with the biggest threat the universe has ever known-and a coalition of foes determined to bring his career and his story to its apocalyptic end! You cannot miss the game-changing two-part finale of Morrison and Sharpâs epic run… 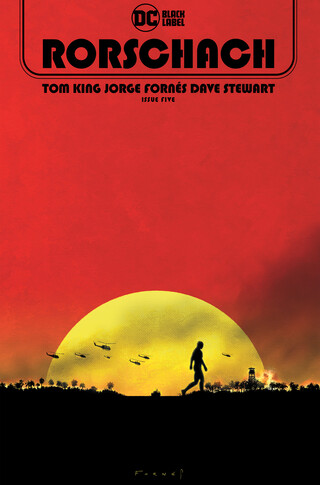 RORSCHACH #5 (OF 12)
Art by:Jorge Fornes
Written by:Tom King
Rorschach tried to kill the leading contender to unseat President Redford, a governor by the name of Turley who has a lot to say. Turley believes the Redford people were behind the hit, but the detective investigating the case isnât so sure. To prove Turley wrong, he has to figure out how Rorschach and Laura got so close to actually doing the job, and the answer to that might be deep in the Turley campaign itself, including the governorâs past with a masked man called the Comedian.