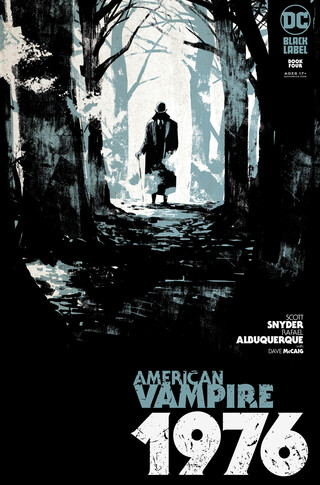 AMERICAN VAMPIRE 1976 #4 (OF 9)
Art by: Rafael Albuquerque
Written by: Scott Snyder
Key clues and coordinates in hand, the rogue branches of the VMS reunite for a final mission that could unlock the secret to taking down The Beast. On their journey to find answers about a pact between Americaâs Founding Fathers and an ancient counsel of monsters, the whole team-Skinner, Pearl, Book, Felicia, Travis, and Cal-realize theyâll need to confront their own complicated personal pasts before they have a hope of correcting world history. Back at the White House, the Gray Traderâs secret associate, Bixby, wrestles with his allegiance to evil and makes a final decision about the presidentâs fate. 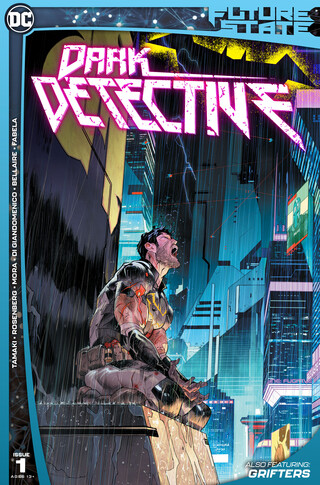 The world thought Bruce Wayne was dead. They were dead wrong! When the sinister para-military organization known as the Magistrate seizes control of Gotham City, the original Batman went big to put them down…but even the Dark Knight couldnât predict how far this evil force would go to stop him. Now, Bruce Wayne is on the run! From Eisner Award-winning writer Mariko Tamaki and rising star artist Dan Mora, itâs the story of a Batman pushed to the brinkâwith nothing left to lose.

Also in this issue, Grifter is back! Cole Cash is having a bad day, and thatâs not going to improve when the detectives of the GCPD show up! Will a chance meeting with Luke Fox change his luck? Or is his day about to get a lot worse? 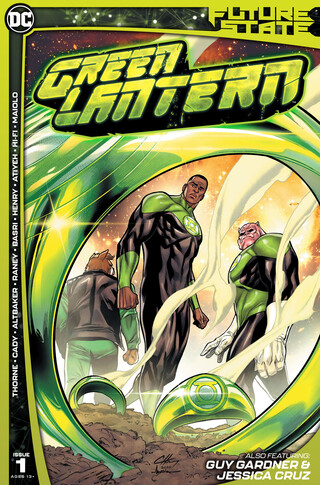 FUTURE STATE GREEN LANTERN #1 (OF 2)
Art by: Clayton Henry,Â Tom Raney,Â Sami Basri
Written by: Ryan Cady,Â Ernie Altbacker,Â Geoffrey Thorne
Assigned to map and contact new lifeforms past the 3,600 known sectors of space protected by the Green Lantern Corps, John Stewart and an elite team of Lanterns are trapped behind enemy lines and fighting for their lives when the Central Power Battery goes dark and leaves the entire corps defenseless. Meanwhile, across the cosmos, Green Lantern Jessica Cruz finds herself powerless and forced to battle the invading Yellow Lanterns of the Sinestro Corps, and Guy Gardner, trapped on distant world, decides to reopen Warriors Bar. 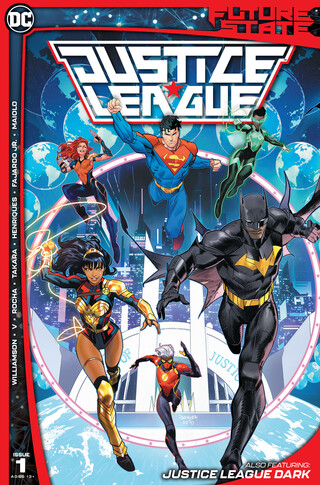 Witness the start of a new era for the Justice League starring Jonathan Kent as Superman, Yara Flor as Wonder Woman, Jo Mullein as Green Lantern, Andy Curry as Aquawoman, a new Flash from the MultiverseÂ and Tim Fox as Batman! Together, they protect the future, yet apart, their identities are secret even from one another…but why? When their greatest adversaries wind up murdered in an abandoned Hall of Justice, all clues point to…the Justice League! The new teamâs adventures begin here!

And in a new tale of the Justice League Dark, a witch hunt across the DC Universe begins as magic users are harvested and executedâand the team is on the run! Zatanna and Detective Chimp (now possessed by Etrigan) must round up new and old teammates, including John Constantine, RagmanÂ and Madame Xanadu. Their mission? To battle the power-mad Crow King, Merlin, before his plans for magical domination destroy the fabric of reality. But where is Dr. Fate? And what led the team to disband in the first place? Discover the truth here! 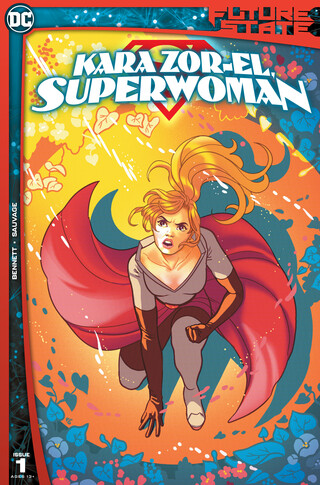 Art by:Marguerite Sauvage
Written by:Marguerite Bennett
Kara Zor-El, Supermanâs hot-tempered cousin, has finally found peace and purpose away from Earth and its heroes. Now known as Superwoman, she watches over the Moon and the refugees from across the galaxy who have congregated there. But all of that is about to change when a spaceship piloted by a runaway alien crash-lands and turns Karaâs world upside down! Does this fugitive come in peace? Or does this arrival bring war to our heroâs front door? 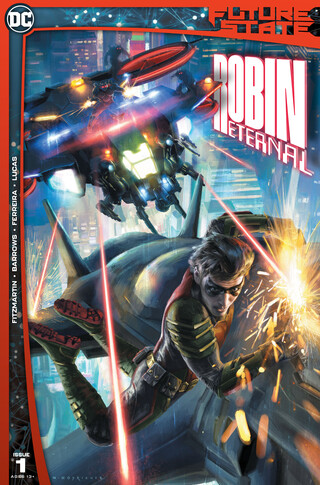 FUTURE STATE ROBIN ETERNAL #1 (OF 2)
Art by: Eddy Barrows
Written by: Meghan Fitzmartin
Lazarus Resin is on its way to Gotham City, and the Magistrate intends to use this regenerative super drug to make its forces immortal! That is, unless Tim Drake has anything to say about it! Join the ultimate heist at 20,000 feet as Robin and Spoiler hijack the sky convoy that could mean the end of freedom in Gotham forever-if the emotional baggage between Tim and Stephanie doesnât do them in first! Itâs the fist-flying, sky-diving, robot smashing, fascist-punching adventure that you cannot miss-from rising star writer Meghan Fitzmartin (Supernatural) and top artist Eddy Barrows (Detective Comics)! 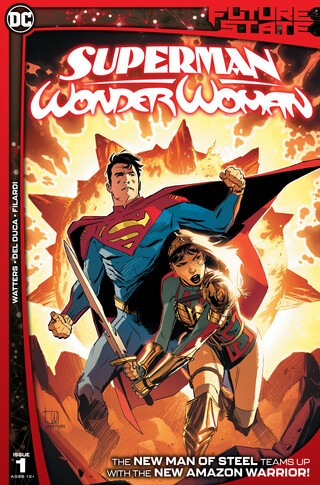 FUTURE STATE SUPERMAN WONDER WOMAN #1 (OF 2)
Art by:Leila del Duca
Written by:Dan Watters
The sun has set on the heroes of the past, and a new age is dawning! As two arrogant gods challenge one another to a contest of strength, Superman and Wonder Woman are forced to take action to save their cities from the chaos. Together, Jonathan Kent and Yara Flor, man of science and woman of myth, have the potential to become something powerful, but thatâs only if they can learn to get along! Can the two fledgling heroes put their differences aside long enough to save the world they have sworn to protect? 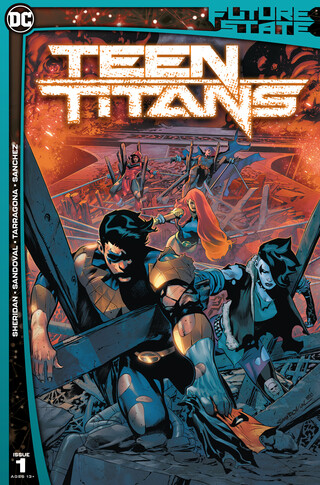 FUTURE STATE TEEN TITANS #1 (OF 2)
Art by: Rafa Sandoval
Written by: Tim Sheridan
When the original New Teen Titans formed a school to mentor and train young heroes, they wanted to help save the world. Years later, Titans Tower is a monument to a graveyard of pupils lost in a terrible battle. Returning to the site of their greatest failure, Nightwing, Starfire, Beast Boy, and Cyborg join Raven to plot a course to face off against the evil that destroyed their team and school. Loyalties are questioned and motives are suspect as the former teen heroes must turn to the mysterious Red X-a former student-for help. Donât miss the first comics appearance of this Red X, previously seen only in the hit animated TV series Teen Titans Go! 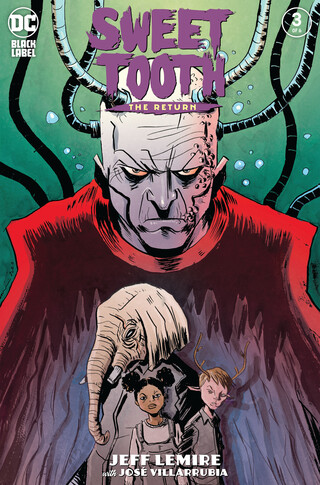 SWEET TOOTH THE RETURN #3 (OF 6)
Art by: Jeff Lemire
Written by: Jeff Lemire
Oh no, oh no! Things are even worse now! Father told the boy and Penny to go to the jail cell for a time out, but now it looks like they have escaped! And whatâs this? One of Fatherâs nannies has gone missing too? And the Downsiders are angry with Father? Oh dear, this simply will not do. Not one bit. The people must be put back in their places. Order must be maintained. Otherwise humanity cannot survive. Will Penny and the boy ruin Fatherâs perfect plans, or will he have to put an end to the meddlesome children?