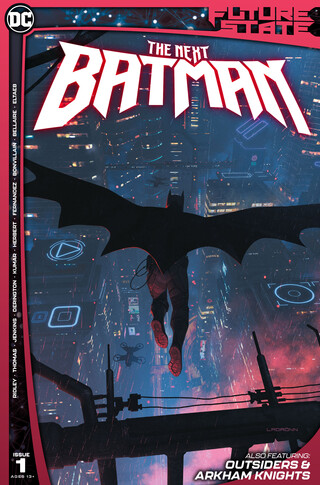 FUTURE STATE: THE NEXT BATMAN #1
Gotham City has always been dangerous, but now, itâs downright deadly! Following the tragedy of âA-Day,â the mayor allowed the private law enforcement group known as the Magistrate to take over policing so-called mask crimeâand that has given rise to a new Dark Knight! What is this mysterious crimefighterâs connection to former Batman weaponeer Lucius Fox? The fight for justice has never been this dangerous!

Then, in aÂ new tale of the Outsiders, everything in Gotham City may be under the thumb of the Magistrate, but even members of that totalitarian force know that the outskirts of town are protected by the sword of Katana!

Plus, ride with the Arkham Knights on their quest for freedom. Arkham Asylum has been decommissionedÂ and the Magistrate rules the land with an iron fist and zero tolerance. Now itâs time for the lunatics to take back their town! Follow Croc, Two-Face, Phosphorus, Zsasz, ClayfaceÂ and Astrid Arkham as the Arkham Knights raise holy hell on the occupiers of Gotham! 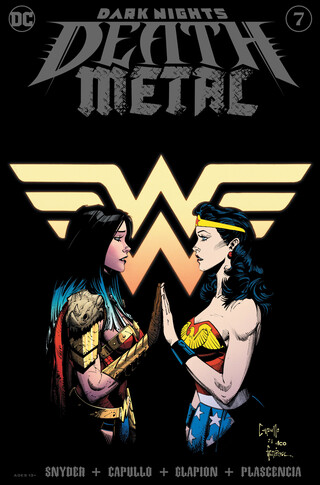 DARK NIGHTS: DEATH METAL #7
The song remains anything but the same as the house lights start to come up on DCâs biggest, baddest battle for control of the Multiverse! The Darkest Knight is on the verge of ending this concert once and for all, but Wonder Woman has more than just a greatest hit planned. The Amazonian warrior stands ready to shred the Darkest Knight, solo! Plus, this extra-sized finale issue includes not one, but two mind-blowing epilogues that lead directly into the next phase of the DC Universeâand no fan will want to miss that! 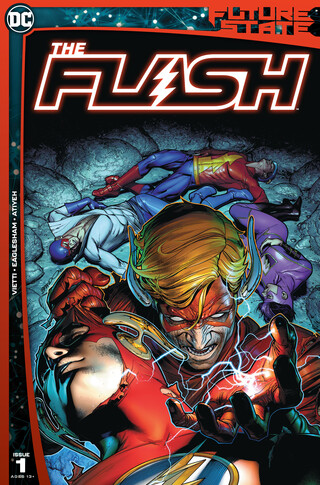 FUTURE STATE: THE FLASH #1
With no powers, no backup and no other choice, Barry Allen and the other former Flashes face the deadliest threat theyâve ever encounteredâWally West. Possessed by an evil force trapped for thousands of years inside the Speed Force, Barry turns to his greatest foesâ weapons to save the young man he loves like a son. In the end, how much will Barry sacrifice to save the former Kid Flash? 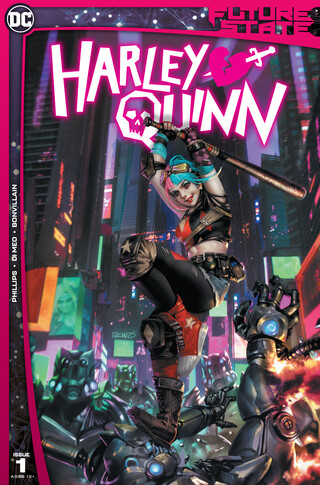 FUTURE STATE: HARLEY QUINN #1
In a bold move that rocks Gotham City, the Magistrate has imprisoned Harley Quinn! The villain once known as the Scarecrow, now a pawn of the Magistrate, taps into Harleyâs knowledge of Gothamâs villains and the Black Mask Gang for his own dark purposes. Crane and his bosses think they have Harley Quinn defeated and her spirit broken, but they are sorely mistaken-and Harley will have her revenge. Written by rising star writer Stephanie Phillips and drawn by fan-favorite artist Simone Di Meo, the next era of Harley Quinn begins here! 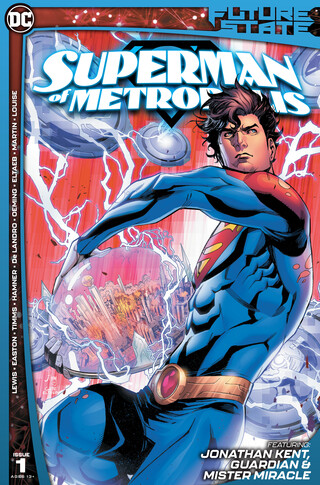 FUTURE STATE: SUPERMAN OF METROPOLIS #1
Before leaving for parts unknown, Clark Kent entrusted Earthâs safety to his son. Now, Jonathan Kent is Superman! Top priority for this new Superman: to protect Metropolis. When a new version of Brainiac attacks, Jon takes drastic measuresâwhich result in the Bottle City of Metropolis! But watch out, Jon, because Supergirl is on her way, and she is not happy with your decision.

Meanwhile, in the new bottle city, a new hero has risen. Jake Jordan, the former Manhattan Guardian, came to the City of Tomorrow to start over. But heâs not the only one who wants a new beginning. An anarchist calling herself Honest Mary sees this time of trouble as an opportunity for rebirth, and sheâll tear down the entire city to prove her point. Does Jake have what it takes to save his new home from disasters both inside and out of the bottle? Supermanâs former pal Jimmy Olsen is going to make sure he does!

Finally, the current Mister Miracle, Shilo Norman, is also in the bottleÂ and heâs looking for a way out! Heâd better be careful, though, or he may end up someplace unexpected. Itâs a story that continues inÂ Superman: Worlds of War #1!