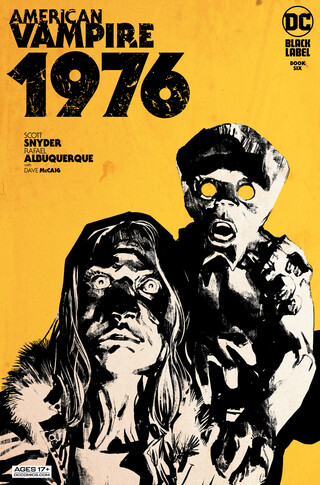 AMERICAN VAMPIRE 1976 #6 (OF 9)
Art by:Rafael Albuquerque
Written by:Scott Snyder
With the help of the Council of Firsts, Skinnerâs team has learned the secret sacrifice required to obtain the Blood of Light-their only hope of stopping the Beast from destroying humanity and conquering the world. Finally within reach of the remedy, the crew sends one of its own on the grueling last leg of the mission-but a devastating betrayal and an unwelcome revelation about Skinnerâs quest for immortality could sabotage the expedition. 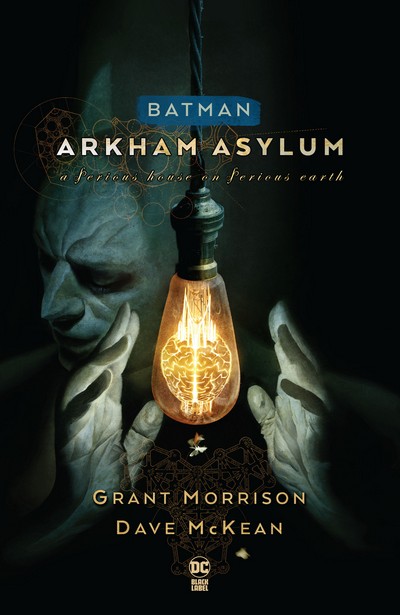 BATMAN ARKHAM ASYLUM NEW EDITION TP
Batman â Arkham Asylum New Edition (2020) :Â One of the greatest Batman stories ever told, Batman: Arkham Asylum is back in a new edition of the classic hardcover! The inmates of Arkham Asylum have taken over and are demanding Batman in exchange for their hostages. Accepting their demented challenge, Batman is forced to endure the personal hells of The Joker, the Scarecrow, Poison Ivy, Two-Face, and many other sworn enemies in order to save the innocents and retake the asylum. Includes newly remastered artwork by Dave McKean, available for the first time in this format. 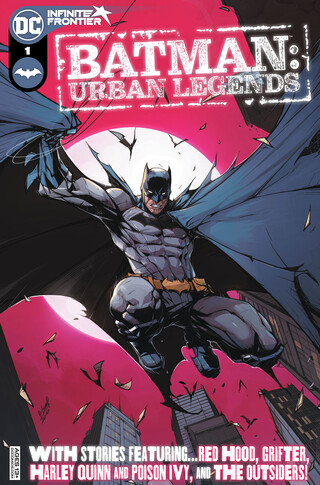 Batman may be the biggest name in Gotham City, but there are lots of other heroesâand villainsâwho will get a turn to shine inÂ Batman: Urban Legends, a brand-new monthly series tying into the biggest events in Gotham City. The series begins with these canât-miss tales:

– Writer of the DC Future State âGriftersâ story Matthew Rosenberg picks up where he left off, continuing from the pages ofÂ Batman #101!Â Superstar artist Ryan Benjamin joins the team as we learn why Cole Cash is in Gotham in a tale that hints at what Halo might be…and we also get Batman vs. Grifter-round two!

– NewÂ Harley QuinnÂ writer Stephanie Phillips andÂ DC Future State: The Next BatmanÂ artist Laura Braga join forces for a Harley tale set just before the launch of her new series. Harleyâs determined to sort out her history with Poison Ivyâbut first, sheâll have to find her!

– Coming off the DC Future State âOutsidersâ tale, writer Brandon Thomas begins a three-part saga reuniting Black Lightning, Katana and Metamorpho. But this reunion quickly turns into a confrontation with a figure from Katanaâs past, in a story drawn by fan-favorite artist Max Dunbar (Champions, Dungeons and Dragons, Judge Dredd)! 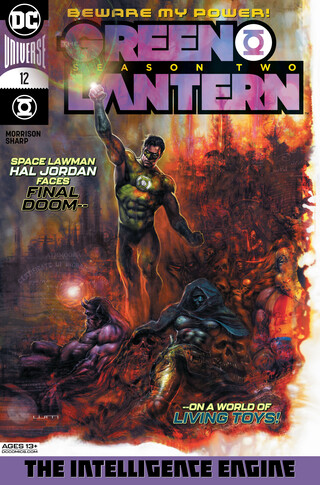 GREEN LANTERN SEASON TWO #12 (OF 12)
Art by:Liam Sharp
Written by:Grant Morrison
Itâs Hal Jordan vs. Hector Hammond, and our Emerald Knight will need to summon all of his willpower to face down the psionic madman. Check out Grant Morrison and Liam Sharpâs grand finale more than two years in the making! This tale touches on every plot thread from the entire run, and itâs fully charged with fantasy, sci-fi, and Green Lantern lore. Say it with us now, âIn Brightest Day, In Blackest Night…â 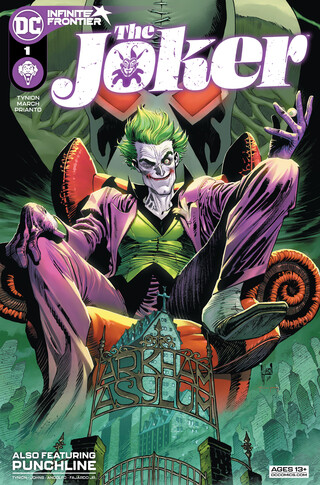 Following the events ofÂ Infinite Frontier #1, the Joker is the most wanted man in the world! But the Clown Prince of Crime is several steps ahead of law enforcementâand heâs on the run overseas. James Gordon, facing retirement, realizes this is the manhunt of his life and the last piece of a storied careerâ¦but what mysterious and deadly forces are also in pursuit of the Joker?

And in the backup story, following the events of the smash hitÂ Punchline #1, DCâs most controversial new villain navigates the infrastructure of Blackgate Penitentiary. While on the outside, Harper Row takes up the mantle of Bluebird to stop her brother from falling under Punchlineâs influence. 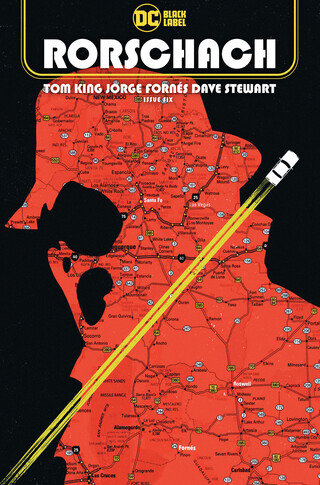 RORSCHACH #6 (OF 12)
Art by:Jorge Fornes
Written by:Tom King
Common tragedies can bind two people together, sometimes in all the wrong ways. The investigation into a famous comic book creatorâs relationship with a deranged young girl takes the detective to places he never wanted to go. Witness how a woman raised to fear the squid invasion and distrust facts seeks a man whose creations embody strength, justice, and truth, and compels him to trade his paper heroes for flesh and blood. 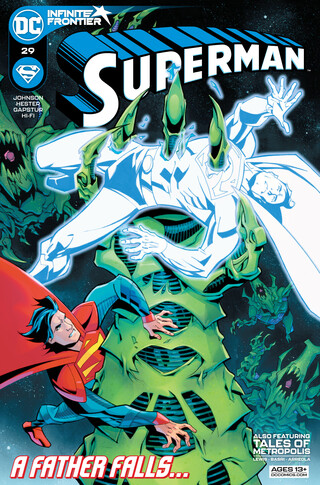 SUPERMAN #29
Art by:Sami Basri,Â Phil Hester
Written by:Sean Lewis,Â Phillip Kennedy Johnson
Writer Phillip Kennedy Johnson jumps from DC Future State back to the present for a two-part story that spansÂ SupermanÂ andÂ Action ComicsÂ this month! In âThe Golden Age,â Jonathan Kent steps back to examine his fatherâs legacy. When a monstrous foe from outer space attacks Clarkâand nearly kills him!âthis young hero must consider the fact that his father died once before, and the Legion of Super-Heroes told him he could die again. Any threat could be the oneâincluding this one! And in the new backup âTales of Metropolisâ story, writer Sean Lewis (DC Future State: Superman of Metropolis) and artist Sami Basri (Harley Quinn) follow Jimmy Olsen on a quest to meet of some of the cityâs more colorful denizens, beginning with Bibbo Bibbowski! 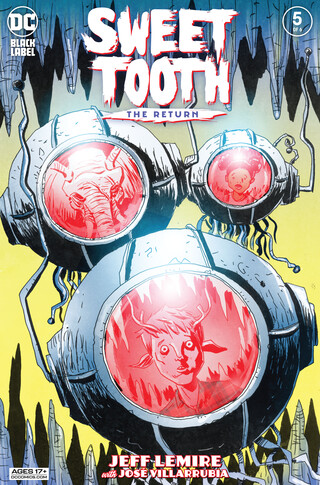 SWEET TOOTH THE RETURN #5 (OF 6)
Art by:Jeff Lemire
Written by:Jeff Lemire
The clock is tick-tick-ticking down. Soon all the nasty hybrid beasts that roam the Earth will get sick and die. And itâs all thanks to our beloved Father and his incredible science virus! Heâs doing it for all of you, because Father loves you very much, and soon you and all his other very good, special friends will get to walk upon the desiccated corpses of the villainous creatures that took our home from us! What a joyous time that will be! Whatâs that? Oh my! Itâs almost time! Letâs pack our bags, brush our teeth, and remember to never lie to Father! Because lying is what a hybrid would do, and youâre much better than one of them, right? 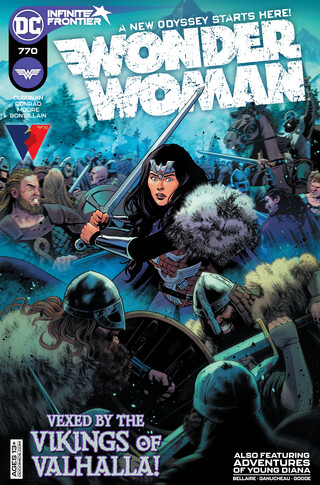 What. Is. Happening?! Wonder Woman just woke up in the middle of battleÂ with rampaging hordes of mythological beasts bearing down on her! Not even the Princess of the Amazons can survive such an assault, but thatâs okayâitâs just another day in Valhalla! The warriors here spend their days fighting and their nights drinking, and if they die in combat, theyâll be resurrected in time for the party. Strange, though, that no one seems surprised to see Wonder Woman in this crowd. Itâs up to Diana to find out why things are going wrong in the Sphere of the Godsâand whether it has anything to do with what landed her in the Norse afterlife.

This bombastic adventure comes from the new creative team of writers Becky Cloonan and Michael W. Conrad (DC Future State: Immortal Wonder Woman) and artist Travis Moore (Nightwing)! In the backup story, the world may know her as Wonder Woman, but once upon a time she was just Diana of Themyscira, a young girl struggling through adolescence on the shores of a mysterious island. Brought to you by Eisner Award winner Jordie Bellaire and fan-favorite artist Paul Ganucheau, this new backup story will present an intimate look into the princessâs upbringing and the hidden secrets of her past. 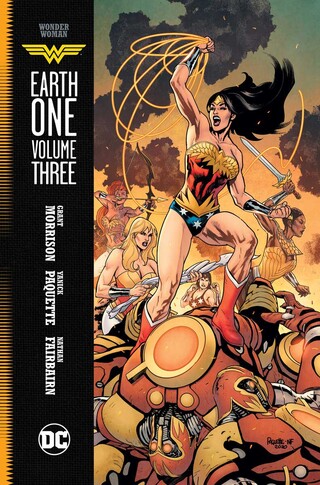 Diana, now queen of the Amazons, must assemble the disparate Amazonian tribes for the first time in a millennium. Max Lord’s assault on Paradise Island with his destructive A.R.E.S. armors is on the horizon, and in order to weather the war that is coming, Wonder Woman will need the full might of her sisters by her side! Can Diana finally bring her message of peace to Man’s World, or will Max Lord’s war burn the world and the Amazons to ashes?

Continuing the tradition of the critically acclaimed Earth One tales that challenge the status quo of the comics industry,Â Wonder Woman: Earth One Vol. 3Â is Grant Morrison and Yanick Paquette’s final installment of this visionary and enterprising graphic novel series.