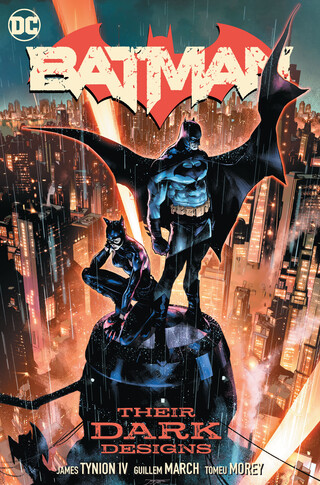 BATMAN (2020) VOL 01 THEIR DARK DESIGNS HC
Itâs a new day in Gotham City, and itâs anything but the same old Batman. With Bane vanquished and one of his longtime allies gone, Batman has to pick up the pieces and step up his game. He has a new plan for Gotham City, and heâs not the only one. Deathstroke has returned as well-and thatâs just the start of a conspiracy that will rock Batmanâs world. Who is the mysterious master criminal known as the Designer, and what dark secret do they share with The Joker, Penguin, Riddler, andâ¦Catwoman? And what do their machinations mean for Gotham? Plus, meet Punchline-The Jokerâs new partner in chaos! Collects Batman #86-94. 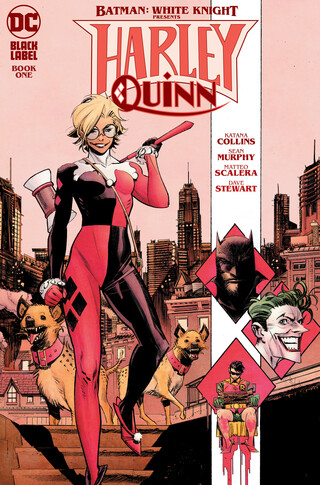 BATMAN WHITE KNIGHT PRESENTS HARLEY QUINN #1
The Joker is dead, Bruce Wayne is behind bars…and Gotham City is just starting to redefine itself without Batman. As Harley Quinn struggles to adjust to her new life as the mother of Jack Napierâs twins, an elusive mastermind called the Producer seizes the moment to assemble a crew of villains-starting with the Starlet, a serial killer who murders Gothamâs golden age film stars in homage to their silver screen roles. When a recent, gruesome crime scene suggests a connection to The Joker, the GTO, and FBI agent Hector Quimby turn to Harley as the one person with information that could crack the case. With some help from Bruce, Harley agrees to investigate-but to protect her children and her city from a fatal final act, Harley must flirt with madness and confront her own past. 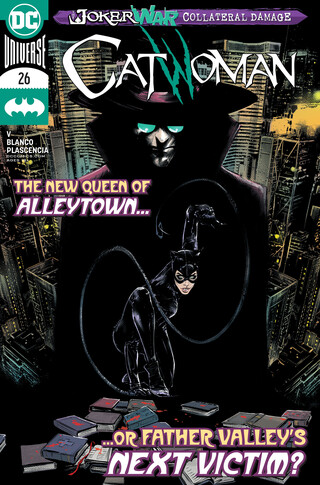 CATWOMAN #26
In the aftermath of âThe Joker War,â Selina Kyle has taken up residence in Alleytown. But when she finds that her old stomping grounds have been taken over by drug-running mobsters, she hatches a plan to take the town back! However, unbeknownst to her, she is being tracked by a terrifying new foe: a hit man in priestâs clothing known only as Father Valley, who carries a bag of bibles around as trophies from each of his victims. Will she be able to loosen the mafiaâs stranglehold on her, new hometown or become another victim to Father Valleyâs sacred oath? 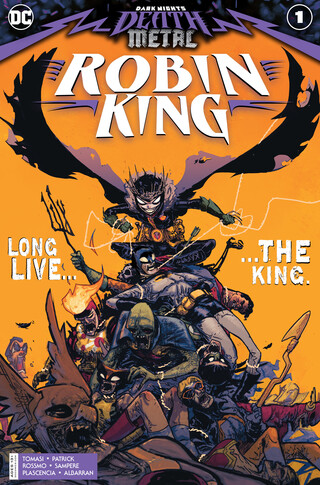 DARK NIGHTS DEATH METAL ROBIN KING #1 (ONE SHOT)
With a utility belt filled to the brim with weapons designed to kill every hero in the DCU, Robin King is the most sadistic soldier in the Darkest Knight evil army! Can anyone stop him from laying waste to Earthâs last line of defense? And how did he become one of the Batman Who Laughâs groblins in the first place? And in the backup story, can the Robins liberate Gotham City from the Darkest Knightâs control? 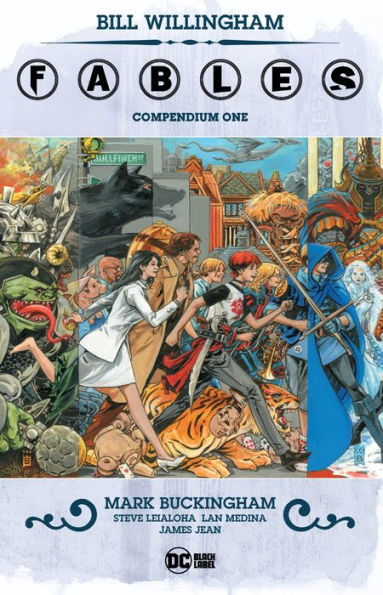 FABLES COMPENDIUM ONE TP
Get lost in the fantastic world of Bill Willingham’s acclaimed, Eisner Award-winning series Fables, now collected in a beautiful and story-packed compendium!

When a savage creature, known only as the Adversary, conquered the fabled lands of legends and fairy tales, the famous inhabitants of folklore were forced into exile. Disguised among the normal citizens of a modern New York, these magical characters created their own peaceful and secret society, which they called Fabletown.

Meanwhile, trouble of a different sort brews at the Fables’ upstate farm, where non-human inhabitants are preaching revolution…and threatening the carefully nutured secrecy of Fabletown.

Collecting issues #1-41, Fables: The Last Castle, Fables: 1,001 Nights of Snowfall, and a short story from Fables: Legends in Exile! 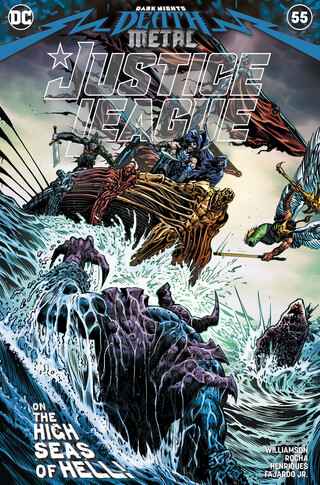 JUSTICE LEAGUE #55
The motley crew of âDoom Metalâ sets sail for the cliffs of insanity, captained by Nightwing-or so he thinks! The team fractures, and Detective Chimp reveals the horrible secret wish in his heart. And speaking of hearts, Hawkgirl will stop at nothing to find Martian Manhunter, even if she jeopardizes the Leagueâs mission and their souls. Part three of this five-issue tie-in to Dark Nights: Death Metal features the debut of a villain so huge he dwarfs all hope. Enter the Omega Knight. 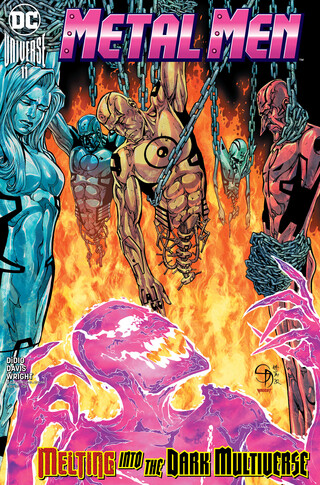 METAL MEN #11 (OF 12)
The Metal Men are together again, as Nth Metal Man, Gold, and Tina are reunited with Magnus and the rest of the teamâ¦but now theyâve got a one-way ticket to the Dark Multiverse-so how will they get out? And to make matters worse, they run into their own worst enemies, and Nth Metal Manâs old friends-Dark Multiverse versions of themselves! Plus, a surprise guest star will appear to help, in this most unlikely of places! 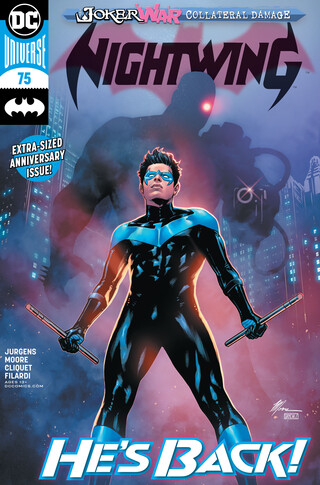 NIGHTWING #75
In the wake of âThe Joker War,â Nightwing is back-but is he back for good? And does he remember Bea? With the help of Batman, Batgirl, his Teen Titans friends, and even Alfred, Nightwing must decide for himself which path to take. Then, when KGBeast discovers Nightwing is still alive, his street credibility is on the line if he doesnât go to finish the job he started when he tried to kill Nightwingâ¦and missed! Nightwing better watch his back is he wants to be back for good! 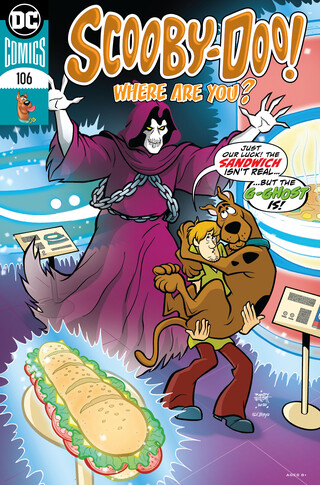 SCOOBY-DOO WHERE ARE YOU #106
Usually, when an artist is readying an exhibit for the public, the biggest fear is a criticâs review. That would still be the caseâ¦if a ghostly visitor hadnât begun to haunt the Museum of Holographic Artâs newest exhibit! Can Scooby and the gang use their renowned sleuthing skills to see through the ghostâs plans before the museum is forced to shut down for good? 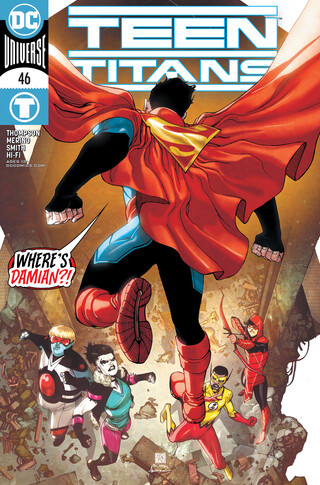 TEEN TITANS #46
With Damian Wayne renouncing his role as Robin and leaving the Teen Titans behind, Jon Kent returns from the future and the Legion of Super-Heroes to ask the remaining Titans some tough questions about his best friend. And when Superboy asks questions-he demands answers.