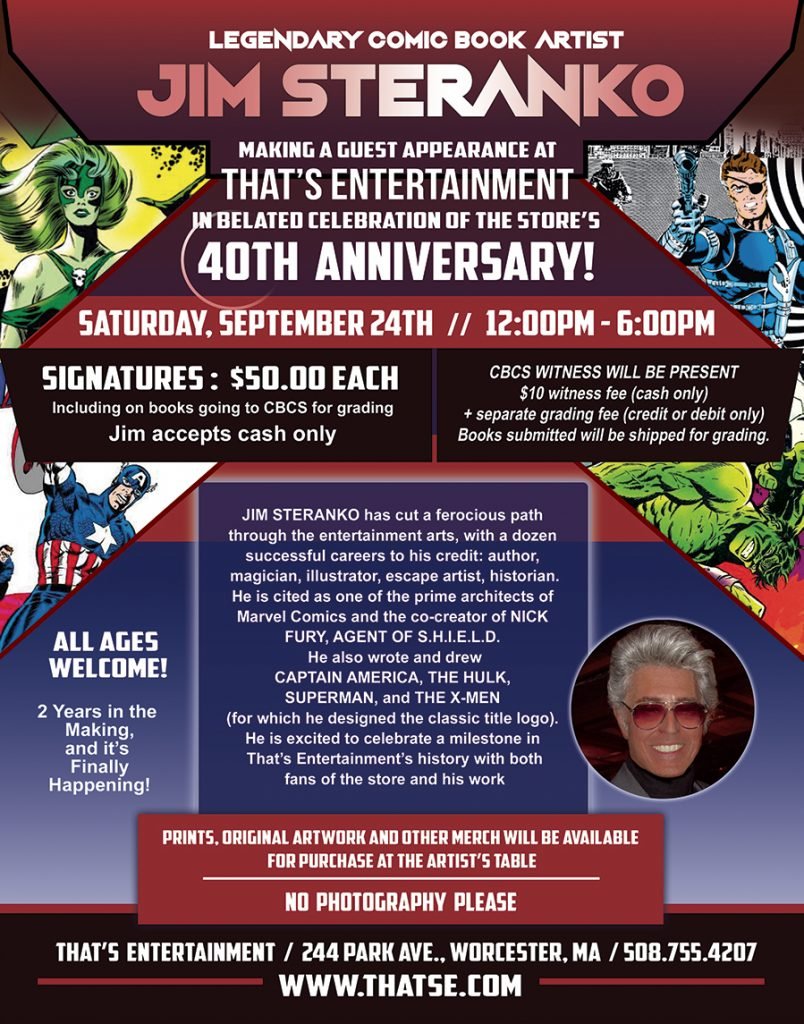 In honor of their belated 40th anniversary celebration, Thatâs Entertainment of Worcester, Massachusetts invites everyone to a very special signing event with legendary comic book artist Jim Steranko. The event will be held on Saturday, September 24th, from 12:00 p.m. to 6:00 p.m. Admission will be free. Attendees may request signatures from Steranko for $50.00 each (cash only). A CBCS witness will be on staff for attendees who wish to submit signed comics for grading/authenticating. Witness fees are $10 per signature witnessed (cash only). Additional grading fees are separate (credit or debit only).

Steranko kindly asks attendees to refrain from taking photos during the event. However, a photographer on site will be taking photos intermittently of both attendees and the guest artist, which will later be shared on Thatâs Entertainmentâs social media web pages.

JIM STERANKO has cut a ferocious path through the entertainment arts, with a dozen successful careers to his credit: author, magician, illustrator, escape artist, historian. He is cited as one of the prime architects of Marvel Comics and the co-creator of NICK FURY, AGENT OF S.H.I.E.L.D. He also wrote and drew CAPTAIN AMERICA, THE HULK, SUPERMAN, and THE X-MEN (for which he designed the classic title logo);

As a musician, he gigged with Bill Haley in the early days of rock ‘n’ roll; as a pop-culture icon, he has appeared at more than 400 international events and exhibited his work worldwide, including at the Smithsonian Institute in Washington, DC and the Louvre in Paris; and his two volumes of THE HISTORY OF COMICS have sold more than 100,000 copies each. As an escape artist, his death-defying performances inspired the character Mister Miracle and, according to Pulitzer Prize-winning novelist Michael Chabon, he was the man upon which the protagonist of THE AMAZING ADVENTURES OF KAVALIER & KLAY was based; and moreâphotographer, ad agency art director, sideshow fire-eater, male model, typographer, designer…the list goes on.

As a filmmaker, he collaborated with Steven Spielberg, George Lucasâfor whom he created the look of Indiana Jonesâand Francis Ford Coppola on some of their most popular films. He served as Creative Consultant for the History Channel’s two-hour documentary COMIC-BOOK SUPERHEROESâUNMASKED; shook up Twitter with his innovative TNT technique (visit his live Sunday-night sessions by typing in iamsteranko); and is currently prepping AN EVENING WITH STERANKO for theatrical venues across the country.

His dozen CAPTAIN AMERICA variants topped Marvel sales charts; the IDW SHIELD ARTISTâS EDITION sold out before publication (and won an Eisner Award); and his 2017 OVERSTREET PRICE GUIDEâwith his Batman coverâhad record-breaking sales. His covers for ACTION 1000, CAPTAIN AMERICA 700, and DETECTIVE 1000 set high sales records. Recent polls cite Steranko as the 5th Most Influential Comics Artist in the history of the form. Over the past several decades, he has amassed more than 100 highly-commercial Intellectual Propertiesâhis Theatre of Conceptsâwhich range from childrenâs interactive-learning entertainments to high-action adult digital gaming, from science fiction to superheroes. His vision is to shape, structure, and synthesize character-driven projects with state-of-the-art technology for the World of Tomorrow. And he’s still the best-dressed man in comics.

Thatâs Entertainment Manager Ken Carson says, âThe Steranko History of Comics, which I read as a teen back in the 1970s remains my very favorite book about comics. He brought the early Golden Age of the comic book industry to life for me, very vividly. Steranko is so well-known for his ground-breaking artwork at Marvel Comics, but I would add that heâs an exceptional author, too.â

Store marketing manager says, âItâs so great that we are finally able to host this event after a two-year delay due to covid-19. Iâm excited to meet the legendary Steranko, whom Iâve only known through email correspondences up until this point. He is looking forward to spend some quality time with both staff and attendees. â

That’s Entertainment, located at the corner of Lois Lane and Park Ave. in Worcester, MA, is a pop culture emporium which specializes in everyone’s “geek.” In 1997, That’s Entertainment received a Will Eisner Spirit of Comics Retailer Award from Comic-Con International: San Diego. The award, named for comic book creator Will Eisner, recognizes an individual retailer who has done an outstanding job of supporting the comics art medium both in the community and within the industry at large. Check out their wide variety of comics, vinyl records, vintage and modern video games and systems, anime, collectible card games, role-playing games, board games, sports cards, memorabilia, toys, posters, and so much more. For more information, contact Sorana at sorana@thatse.com or call 508-755-4207.